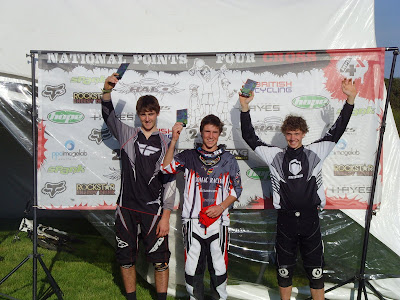 Posted by Rhys Willemse at 8:37 AM No comments:

hi all
this past weekend i raced the Nps national 4x Rnd at bridgenorth in England.
i was lucky enough to find a bike for the weekend which was kindly lent to me by bernard kerr. the track was very wide and fast with big banked up turns and nice flowing jumps. through out the day i won all my heats, then in the final it was a close race, i got an alright gate start but i was second to the first turn and from there i followed the other rider till the last straight where i decided to make a move, i went out wide on the Bern and held it open, than it was a sprint to the last straight full of jumps which i managed to get ahead of the rider and take the win and finish 1st position in junior.
i will have some pictures up soon from the event!!
Cheers
Rhys
Posted by Rhys Willemse at 1:56 AM 1 comment: 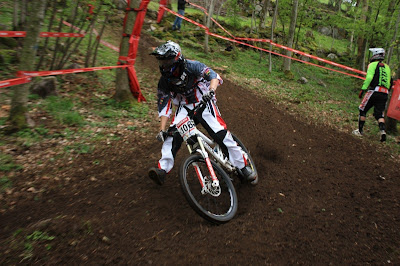 Hey
Just finished the weekend of racing in La Bresse, practice went really well for me in the mud but the conditions were always changing and by the time that qualification came around it was already dry. the dry track was a lot of fun but a bit slippery in areas. in my qualification run i had a good clean run and i was pretty satisfied. but with 231 other people racing on the track i knew it was going to be hard to qualify. it came down to the last 20 people and i was nudged out of the top 80 and ended up placing 86th with a mere 0.2 separating me from qualifying...

but off to the new track now in Andorra and im hoping for a placing there. we walked the track yesterday and it is looking really good, a lot of technical and fast sections. and with a fair bit of snow on the mountain is sure to keep the track damp and cold.

Hi all,
Just here at the 2nd round of the world cups in La Bresse ,France..
after walking the track today, i am quite happy with the track and have been sorting out lines for the race. The track is awesome it has steep sections and really technical parts, but the forecast is for rain Friday, Saturday and Sunday, which is going to make racing quite interesting. I have practice tomorrow from 8:30 to 2:30 so will let you know how everything is going ..

Cheers
Rhys
Posted by Rhys Willemse at 5:42 AM 1 comment:

Rhys Willemse
My life is traveling the world racing Down Hill Mountain Bikes for a living. I spend 5 months a year in Europe riding against the best riders in the world. My best results this 2009 season was becoming Australian Junior DH Champion, 13th Maribor world cup and 4th world championships. Looking forward to doing even better next season. I'm looking for a team to ride this years world cups. If anyone can give me a ride, please e mail: r.willemse@hotmail.com